The City of Cape Coral has been in the development phase on property in near Kismet and Chiquita Roads for well over fourteen years. It will eventually become Festival Park, a location to support large events such as musical, sports and other activities.

But for now, birders routinely come out here looking for the family of Florida Scrub Jays, plus Burrowing Owls, American Kestrels and Eastern Meadowlarks. Currently a Groove-billed Ani has shown up.  I got to see it a couple of times so far. However I keep dipping on the Ash-throated Flycatcher that has also arrived here. I've made several visits without success. But I'll try again later

Another interesting observation made on yesterday's visit was seeing a coyote dash across the road in front of us. Coyotes are becoming more and more commonly seen in our area.  They are even seen and heard on Sanibel Island

Posted by Tom Obrock at 6:43 AM No comments:

There is a pasture on Higginbotham Road near Peace Road in the Buckingham area of Lee County, that sometimes hosts interesting birds.  Especially when rains create a bit of wetlands. Lately a few Wilson's Snipe were seen there plus a Solitary Sandpiper and a Greater Yellowlegs.

Posted by Tom Obrock at 4:45 PM No comments: 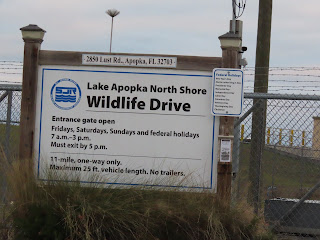 Ran up to Lake Apopka on Saturday to do some birding on the Lake Apopka Wildlife Drive. Vehicle traffic is only permitted on the weekends on the Wildlife Drive, but other trail head locations are usually open everyday to foot traffic.

Wildlife viewing is popular here, especially for birders, in the winter months when thousands of waterfowl and other birds use the marshes to wait out the freezing weather up north.

Arrived early on a chilly, blustery morning. Lots of wading birds like Great Blue Herons, some standing on nests, Snowy Egrets, Tricolored Herons, Great Egrets, White Ibis and Glossy Ibis. Didn't spot any black-necked stilts, but lots of Cormorants and Anhingas. There are thousands of American Coots and Common Gallinules to sort through to identify any waterfowl. There are a great many Blue-winged Teal and Ring-necked Ducks, plus Northern Shovelers, Green-winged Teal and Mottled Ducks.  Both Black-bellied and Fulvous Whistling Ducks are common year round residents here.  Other waterfowl seen today included a lone Lesser Scaup, Ruddy Ducks and Pied-billed Grebes. Other birds today included Purple Gallinule, Limpkin, Green Heron, Swamp Sparrow, Red-winged Blackbirds, Osprey, Northern Harriers, Belted Kingfishers and American Robins.
Dipped on spotting any American wigeons, gadwall and the ash-throated flycatcher that has been hanging out at the gate entrance to the drive. 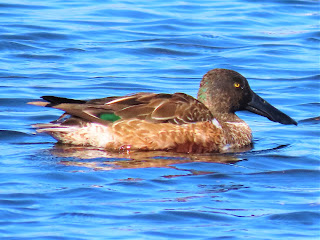 After completing the Lake Apopka drive, I had options.  Either head home or extend my day trip with a visit to Merritt Island NWR. Chose to extend the trip and arrived at Blackpoint Wildlife Drive at Merritt Island just past lunch and was greeted by a mommy Bobcat with her half-grown kitten making a dash across the road ahead of me.

The marshes and wetlands had dried down some since my last visit a few weeks ago, and the variety of waterfowl had diminished. Didn't see any pintails today, but did have a lot of Blue-winged Teal, Northern Shovelers and a large flock of Hooded Mergansers. Also present in smaller numbers Mottled Ducks, Green-winged Teal and a couple of Redheads. The cinnamon teal that has been hanging out at stop #4 wasn't seen, but this location had lots of Dunlin, Western Sandpipers and Ring-billed Gulls.  Other species seen included American White Pelicans, American Coots, Common Gallinules, Caspian and Forster's Terns, Reddish Egrets, a Wilson's Sniped, Sanderlings, Roseate Spoonbills, Wood Storks, Greater & Lesser Yellowlegs, Willets, Pied-billed Grebes and Killdeer. Dipped on American avocets, gadwall, the northern pintails, any rails, sparrows or falcons 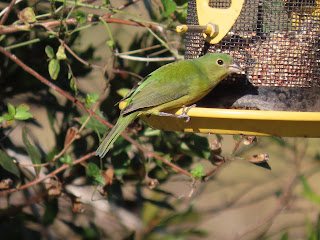 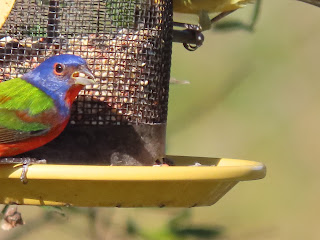 Checked out the Biolab Drive, but not much happening there. Also stopped at the visitor center feeders before heading home and ended the stop with four Painted Buntings.

Posted by Tom Obrock at 4:22 PM No comments:

Last weekend I drove back down to the Florida Keys for some first of the year birding, plus some birding at Lucky Hammock at Frog Pond WMA.

First birds of the day were Common Mynas in Florida City, then it was onto Key Largo. White-crowned Pigeons frequently seen in flight along with Eurasian Collared Doves and Magnificent Frigatebirds. At Tavernier, made a stop at Harry Harris Beach Park for the Purple Sandpiper. His shorebird is wintering far south of its traditionally range.
Got to Big Pine Key about 11am and had to do a bit of search for the Cuban Pewee at Blue Hole, in the National Key Deer Preserve.  But I did get a distance look. The alligators at Blue Hole are a bit more uncommon here in then in most of Florida because there is little fresh water habitat available in the Keys.

Then went onto Key West for the the Red-legged Thrush at the Key West Tropical Forest and Botanical Gardens. Dipped on this bird, but had met some birders who had just seen the American Flamingo at Sammy's Creek Landing WEA on Sugarloaf Key.  Hadn't heard about this flamingo sighting till now and quickly ran down the details and was looking at this bird about forty-five minutes later. Finding the flamingo was a surprise.

Tried to get back up to Florida City before dark, but traffic can be so bad here and it was.

On Day 2 headed over to Lucky Hammock.  Lots of potential special birds to see. I actually had a lifer with spotting a Scaly-breasted Munia in the tall elephant grass. Could hear the 'Whit' calls of the Brown-crested Flycatcher. A pair of Painted Buntings, Limpkins, Brown Thrasher, Gray catbirds, Cowbirds and a Northern Harrier were also present. But had to leave before some of the more interesting birds popped up. Still was a fun weekend. Will need to return soon.

Posted by Tom Obrock at 8:59 PM No comments:

Spent the day looking to start my new year's list with visits to a few local hot spots. 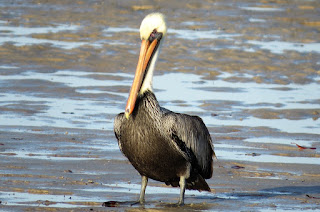 Had  a good start at Bunche Beach, arriving at a low tide.  Best bird was perhaps seeing a Snowy Plover. We occasionally will find a Snowy Plover at Bunche, but the sandier beaches on Fort Myers Beach and Sanibel are better places to look for them.  Other sightings at Bunche included several Reddish Egrets, American White Pelicans, Piping Plovers, Dunlin, Short-billed Dowitcher, Least Sandpipers and Spotted Sandpiper. Dipped on several expected species, which turned out to be the trend of the day.

Next made a quick check of Lakes Park. Looking for least bitterns here, but settled for a Ruby-throated Hummingbird, a Cooper's Hawk and a Yellow-bellied Sapsucker.

Moved on to the boardwalk at Six-mile Cypress Slough Preserve. Which was very quite today.  The same for Rotary Park in Cape Coral. Next were the burrowing owls and Monk Parakeets at the nearby Pelican Boulevard Ballfields. The noisy parakeets can be easy to locate, but the owls were in hiding today.

The Florida Scrub jays were absent today too.  Looked for them in Cape Coral and Lehigh Acres.  Ended the day at Harns Marsh. Lots of Pied-billed Grebes, a few Grey-headed Swamphens and the expected wading birds. So the day's tally wasn't very high. And that's OK

Posted by Tom Obrock at 5:04 PM No comments: 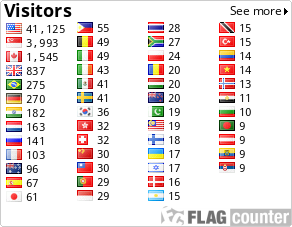